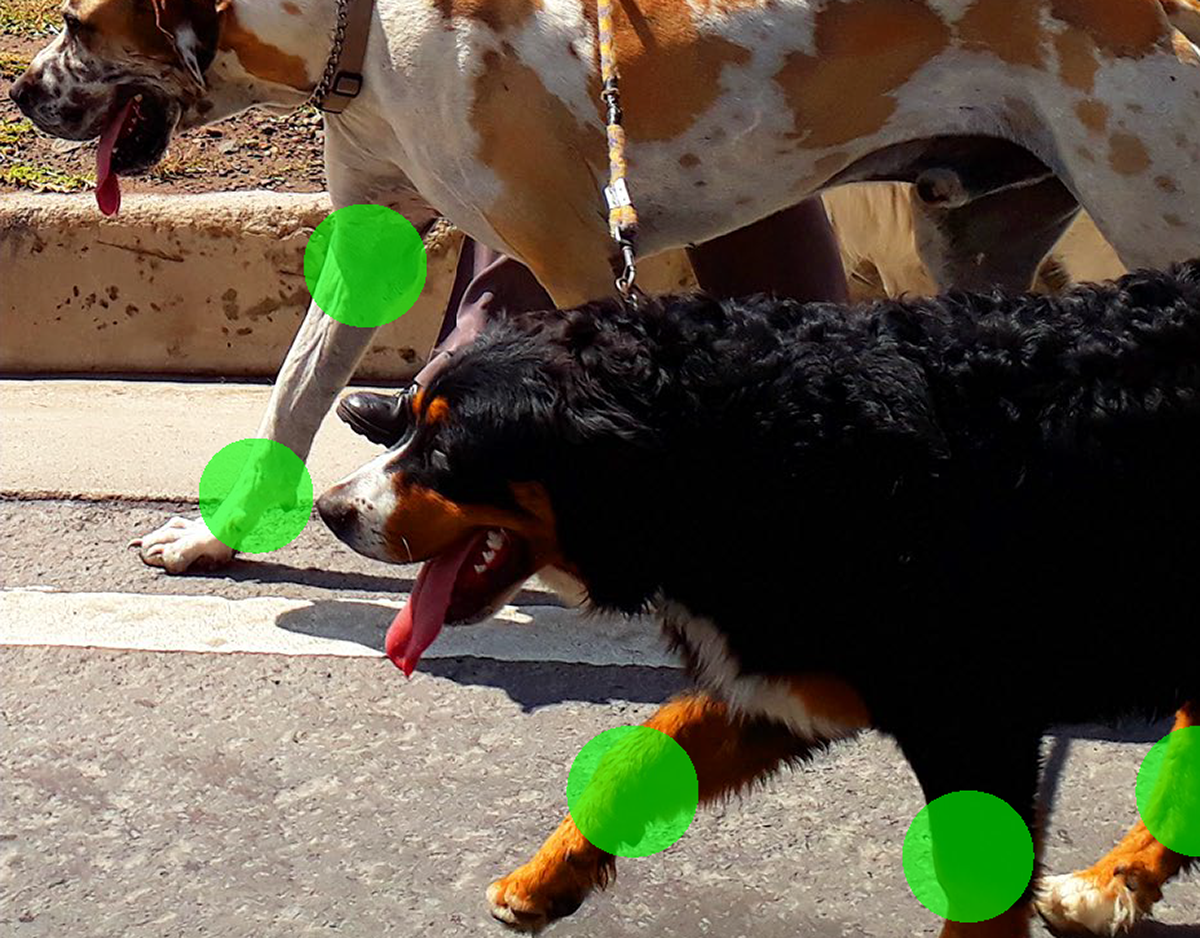 Simply speaking, joints are the connections between bones. Dog joints are similar to joints in mammals, including us humans. In fact, joint diseases like arthritis are so similar in dogs to humans that knowing how to cure joint diseases in dogs allows scientists to discover therapies for humans.

There are three types of joints (this is valid for us humans and other mammals):

Fibrous joints are not mobile. They just stick two bones together (like glue). The most famous example of fibrous joints is the connection between most skull bones (also called cranial sutures).

Cartilaginous joints are moderately mobile. Examples of them are the joints of bones in the base of the skull, the connection between the body of vertebrae in the spine (drawings later in the article) and the hip (coxae) bones connection (left and right in the lower part of the pelvis).

How are joints named?

All dog joints have names. There is a technical name and a common name for each joint.

Joints in the spine

The first vertebra of the spine (atlas) connects with the skull (i.e. occipital bone) in a mobile (synovial) joint. This joint is called atlantooccipital (technical name) or nape (common name).

The first vertebra of the spine (atlas) connects with the second vertebra (called axis) and this joint is therefore called atlantoaxial (can’t think or know of a common name for this joint). The movement is lateral (to the sides) of the neck (it moves the head side to side as if saying “no”).

The rest of the joints in the spine are called intervertebral. All of them are similar. An intervertebral joint will have an upper part of the synovial type and a lower part of the cartilaginous type. Individually, the joints between vertebrae are not very mobile (the movement of the upper synovial joints is very limited, just a sliding movement), but as a whole, the spine can perform movements of flexion and extension.

When a dog is running the spine will go in cycles of flexion and extension. When it is in extension, the body projects itself forward (like a flying arrow).

The joints of the spine with the ribs are called costovertebral. They let the ribs rotate around their long axis so that they move forward (towards the head) during air intake and backward (toward the tail) during exhalation.

From now on when we talk about synovial joints, we may just mention them (for simplicity) as joints

Joints of the forelimb

The foreleg is attached to the trunk by muscles.

Shoulder. The technical name of this joint is scapulo-humeral. The near-spherical surface of the humerus head matches a negative-shaped cavity in the scapula. In dogs (and other quadrupeds) the movements of this joint are mainly flexion and extension of the shoulder (flexion closes the angle of the joint and extension opens it). We, humans, have a more ample range of movements for this joint.

Elbow. In anatomy, this joint is called humeral-radial-ulnar. The bones implicated have contacting areas that resemble a hinge. In dogs and other quadrupeds, as in humans, the movements of this joint are flexion and extension.

Wrist. Also called the carpal joint, made of several (two rows) short bones. As a whole, this joint has flexion and extension movements.

Knuckles. What would be the knuckles in our hand are technically called metacarpal-phalangeal joints (one for each finger; dogs, like us, have five fingers on each hand/paw). The movements they make are also flexion and extension.

Fingers. There are two joints on each finger: interphalangeal proximal and interphalangeal distal. The exception in the dog is finger one (the thumb) having only one joint which connects the only two phalanges present, simply called interphalangeal joint. All these joints follow the pattern of the forelimb with two possible movements: flexion and extension.

Joints of the hindlimb

The hip bones connect to the spine by some very strong but not so mobile joints that you probably has never heard of: the sacroiliac joints (right and left, for each hindlimb, called this way because they connect with the sacral bone of the spine).

Hip. This joint connects the spherically shaped femur head with a corresponding cavity in the hip bone (the acetabulum). Sometimes these shapes don’t match as in dog disease hip dysplasia.

This is one of the joints with more possible movements in the body. The femur can approach the abdomen (flexion of the hip joint) or on the contrary move away, backward (extension). It can also move to the side (abduction) or towards the middle line of the dog (adduction). Rotation around the femur axis is also possible. This joint not only allows dogs to walk, run or jump, stand but also the well-known tree marking in male dogs.

Stifle or knee joint. This joint is the connection of the femur lower end with the tibia and fibula bones. It is a rather complex joint. Another bone participating in this joint is the patella, placed in front. The contacting surfaces do not match in shape and for that reason, dogs (and mammals) have intraarticular meniscus made of cartilages to make the surfaces fit. Many ligaments stabilize the joint. Behind and inner in the knee joint, there are two ligaments called cruciate ligaments that sometimes stretch or break in dogs, specially in those involved on agility activities.  Most of the extension and flexion movements of the whole hindlimb are centered on this joint. Lateral movements are limited by ligaments here.

Hock joint. Corresponds to the ankle joint of a human. It is made of several short/irregular shaped bones (tarsal bones) arranged in three rows. This joint is equivalent to the arm wrist but in the hindleg. The movements of this joint are flexion and extension

Foot joints. Tarsal bones connect to metatarsals and metatarsals connect to fingers through metatarsal-phalangeal joints (equivalent to knuckles in the hands). Finger joints are similar to those of the hand (paw).

It is much easier to understand joint disease in dogs if we know how synovial (mobile) joints parts and their normal healthy function. This normal anatomy deteriorates in conditions such as arthritis (or its progression to osteoarthritis). Dog arthritis symptoms can be much better explained and understood if we know how a normal joint works.

A basic joint needs to have at least two connecting bones. The parts of the bones that connect are called articular surfaces. These zones could get damaged if in direct contact. For that reason, cartilage tissue covers them (articular cartilage) and the contact is made between them.

All synovial joints are covered by a strong capsule (made of fibrous tissue) that keeps the bones participating in the joint in the right place.

Covering the inner part of the capsule, there is a very thin layer called synovial membrane, made of just one tiny layer of flat cells. The synovial membrane and the articular cartilages delimit a cavity that is normally occupied by the liquid produced by the synovial membrane (synovial fluid or synovia). This liquid acts as a lubricant to reduce the friction between the interacting cartilage surfaces. Since the cartilages do not have blood vessels of their own to feed them with nutrients, the synovial liquid takes that function.

Some components are not present in all joints

Some elements are not always present in joints. For instance, in some joints there may be a disk inside (like in the jaw joint and the meniscus in the stifle joint). They function making the shape of the joint surfaces compatible or fitting. A dog (or us) would have serious problems to walk when the meniscus wears off (and surgery will correct it sometimes).

An important additional element of joints is ligaments. They help (together with the articular capsule) to keep bones taking part in the joint in place. Mischievous dogs or those practicing agility sports can sometimes stretch or break ligaments with subsequent pain and potential lameness.

TIP: Ligament is not to be confused with tendons, which connect muscles to bones.

So far, we have covered most of the dog joints and seen what a normal dog joint looks like anatomically.

You can next check our article Arthritis medicine for dogs: Ultimate guide, where we will cover dog arthritis symptoms, risk factors, development of the disease, and treatment options. If you want to know more about dog bones anatomy check our article on the dog skeleton.

Please leave a comment or question if you would like to know more about a specific detail of this article. 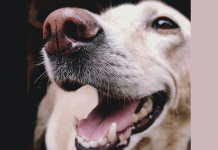 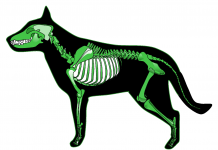