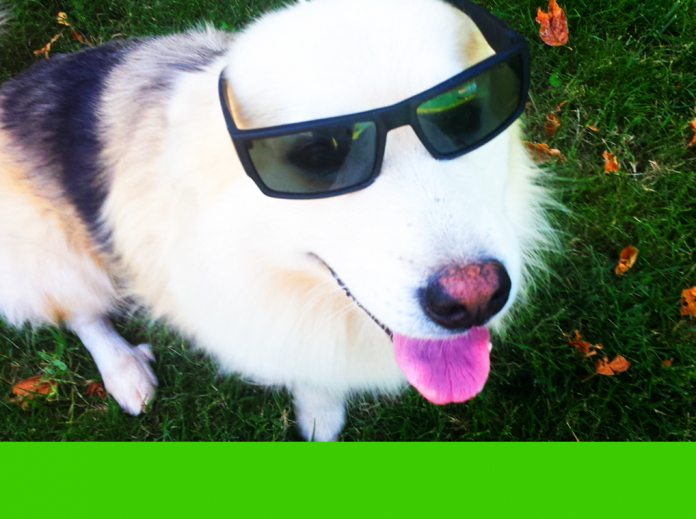 When we humans are having problems with our sight, we commonly start having difficulties reading a book or problems while driving a car. Our pet friends will not be able to tell there is something wrong with their vision and it comes in handy to know when something is wrong. Your dog losing vision can be a much of a problem. 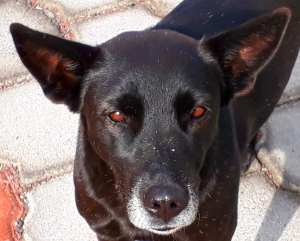 In very obvious partial or total blindness, dogs or cats will start stumbling upon objects in the house and other places. Some other signs of visual problems will be more subtle and difficult to discover.
One easy way to check your dog or your cat’s vision at home is through the menace response test. This is sometimes called the menace reflex, which is not quite a proper term (more about that below). To test your pet this way you will pretend you are hitting your dog (of course, you won’t do it for real!). This will trigger a fast response resulting in your dog closing the eyes and possibly turning the head away from you (the “menace”) or even completely withdrawing from the place. Your dog or cat by closing both eyes will tell you that the visual pathways in their nervous system are intact. These nervous pathways used to execute the response will be also intact (for instance, the nerves supplying and commanding the muscles that close the eyes). One word of caution: Be careful if you try this in a cat (expect being scratched!!).
We said before that some people call this sight test “menace reflex” but should be called menace or threat response (or reaction). There is a difference between a response and a reflex. They both have in common that the body quickly responds to a specific stimulus (like when pricked with a needle). But the difference is that animals are born with reflexes (both the nervous “wiring” and the ability to function even in very young animals), therefore they are inheritable. Also, reflexes are very simple and involve a few neurons. A reaction instead requires learning and in the process, many neurons gradually start to connect and adapt to working together to elicit an answer to the initial stimulus. Therefore, animals are not born with responses already developed but have to “learn” them. In the end, the animal will have established complex neural networks involving several areas of the brain (as opposed to simple reflexes). 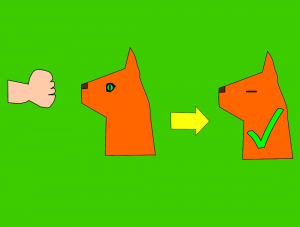 When pretending you are hitting your dog or cat you should avoid moving air across the space separating you from your pet. Moving air can trigger a similar response (eye closing) not involving head turn or withdrawal and having nothing to do with visual function. This is actually a different reflex called the palpebral reflex. You can test this reflex on purpose by touching the lids or the eyelashes (eyelashes are tactile hairs, similar to whiskers). What you will be checking with this reflex instead, as Vets usually do, is not the visual system but the sensitive nerve pathways of the skin of the face area instead (but this is another story). If you are interested in more details about the menace response, we describe both nervous pathways (visual and sensitive) in detail at the end of this article.
If you notice your dog or cat has vision problems you can take it to a veterinary eye specialist (also called an ophthalmologist, as in human medicine) for a better diagnostic on what is causing the problem and a better approach towards a solution. Many diseases affect the eyes, and many have to do with defects or predispositions based on the specific anatomy of the eye or breed. Some eye diseases will not have anything to do with visual nervous pathways (which must be intact for an animal to be able to see), like for instance glaucoma (high pressure inside the eye). An important reason to go see your veterinarian is that when not treated on time, animals can permanently lose their vision. This only reinforces the idea of the importance of detecting any sight loss on time and paying a visit to a veterinary specialist, so that we can prevent or reverse the situation whenever possible.

(You can skip this if you don’t need too many details about the menace response)
Synonyms: This reaction is also called blink-to-threat response and menace response

The menace response is cortically mediated (coordinated by the cortex of the brain) and requires the primary visual cortex and visual nervous pathways to be intact. The visual pathway has four neurons (being flexible, we can include light receptor cells in the eye, sort of modified neurons located in the retina). Three of these four neurons are in the retina of the eye. The receptors (rods and cones) get excited through the light and transmit a nervous impulse to the second neuron, and this passes the message to the third (all three in the retina inside the eye). The third neuron emits axons that get packed together and collectively form the optic nerve, in which these axons travel and make a relay on the brain stem with the fourth neuron. This fourth neuron will take the information to the visual area, located at the cortex of the brain located near the back of the skull. The response is built in several parts of the brain and eventually will get out of the skull through motor nerves (directed to muscles) of the head, specifically pointed to the eyelid muscles (so that the eyes get closed when there is a visual menace). The reflex that closes the eyelids when they are touched is called the palpebral reflex. As most reflexes, it involves a very simple pathway of two neurons: one sensitive neuron that will take the information (about the eyelid being touched) to the brain stem where a connection (synapse) will occur with a motor neuron directed to the eyelid muscles (to give them the order to contract).
Now you know how to have a better idea of how to know whether your dog or cat is having sight problems.
Tip for cats: if your cat is one of those reactive types and you don’t want to get into a fight when testing the menace response, try to drop an object like a cotton ball in front of him and see if he follows it with his eyes 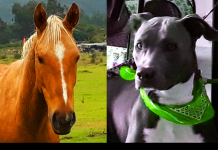 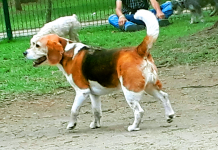